So I was feeling nostalgic the other day and decided to reread one of my favorite childhood books “The Knife of Never Letting Go” by Patrick Ness, and I was just as blown away by its emotional power as when I first read it as a middle-schooler. As an avid film lover even back then, I distinctly remember the story capturing my imagination as I dreamed about the different ways I would approach a film adaptation were I to make it myself. As one does when they rediscover something from their childhood, I immediately looked into whether or not any studio had bought the rights to it, thinking “no, there’s no possible way anyone would want to tackle such a ridiculously difficult movie to make,” only to see a release date for one “Chaos Walking” for.…2021? Next year? What? Directed by Doug Limen, coming right off of his Edge of Tomorrow acclaim? What?? Starring Daisy Ridley and Tom Holland??? Excuse me, what?!?!? I’m just now finding out about this?! And it was shot all the way back in 2017? And it was supposed to release in 2019 but got pushed back 2 years? And it was deemed unwatchable by test audiences? And it is now being completely overhauled for a…uhhhh…oh no…..January release date? You know, the place movies go to die quietly? What.

There’s a lack of information about what exactly is going wrong with the film right now—we know that there are reshoots, but what movie isn’t in the news for reshoots these days? So, having just found out about this debacle yesterday and as a huge fan of the source material, I’d like to throw my voice into the mix and divulge the true reason why the adaptation is having so many problems (ok, anyone who has read 50 pages into the book could figure this out as well): the sound design would have to be one of the most ambitious undertakings in cinematic history if this is to succeed. Hyperbole aside, this entire project hinges on Oscar-worthy sound design, and no amount of reshoots are going to change this fact. So let’s talk about sound in Chaos Walking for a bit.

The story takes place on a planet on which the population has been infected by a virus which causes all the men’s thoughts to be heard out loud. This “noise” is a constant presence radiating from every male character throughout the book, and it’s predominantly what’s going to make sound design for this project a nightmare to pull off. For reference, this is what said Noise looks like in the books. 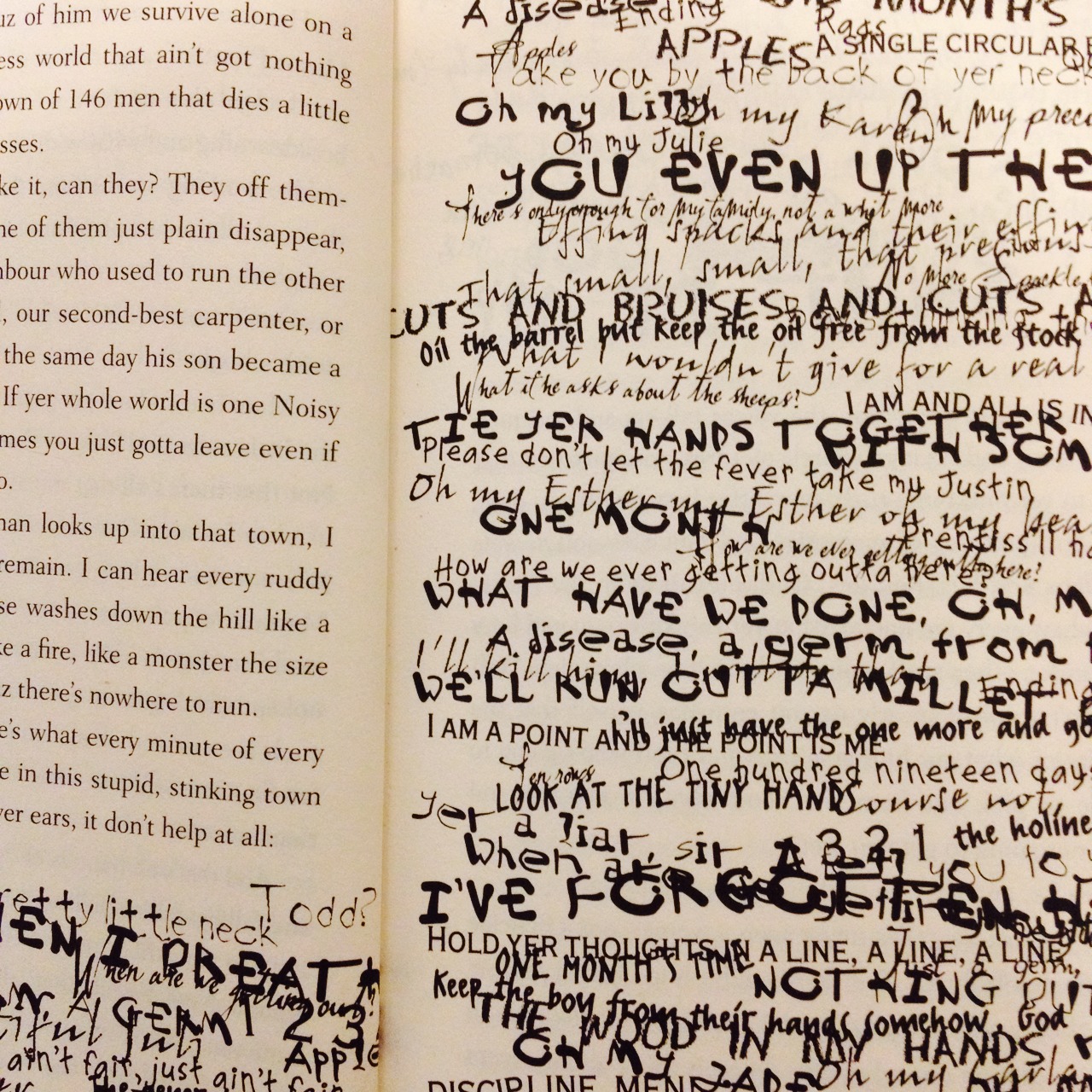 Ok, but movies have represented overwhelming thought jumbles like this in the past, so why is this such a problem now? While I have no doubt that a good sound designer would be able to nail the feeling of this mess of sound, there are a few extra problems when considering how to design this effect within the context of the rest of the movie. The first is that this Noise is always present when a male character is onscreen, and should even be present offscreen in the environmental sound design. Therefore Noise needs to both be intense and overwhelming at times (as shown above), but not so overwhelming that it can’t blend into the background when it needs to. Sure, the characters themselves would always be hearing and understanding each others’ thoughts, but an audience can only be subjected to so much before hitting an information and sensory overload. So the movie’s Noise effect needs different levels of intensity and different sizes and shapes it can take in order to suit a given scene. That’s difficult (and a ton of work to customize it for every character at every moment in the film), but doable.

Next there’s the narrative role that Noise plays in communication between characters onscreen. Since the other characters can always hear each others’ Noise, they’re constantly responding both to things characters actually say as well as to things said in their Noise. For example, Todd (Tom Holland’s character) might say one thing while his Noise is saying three other things at the same time, all of which need contribute to the conversation in some way. This creates a difficult tension in the audience’s focus between the actual words being said during conversations and what a character’s Noise is saying at the same time. As assessed earlier, it’s essential that Noise can recede into the background, letting you put all your attention into a given piece of dialogue. However it also becomes necessary for Noise to contribute to that conversation in spurts before fading back to the background. This push-pull of the audience’s attention between two different sources of voices would need to be a highly delicate process, and one which happens during every single conversation in the entire movie. I’d imagine the sound designers would have to perfect whatever filter they put on the Noise effect so that it’s easily distinguishable from regular dialogue. Then they’d also have to balance the ebb and flow of bringing it into and out of the foreground in a way that is comprehensible by the audience. Again, an extraordinarily difficult task, but one that is not impossible.

The last problem is a bit of an extension from the previous two, namely that this adaptation literally requires voiceover as a narrative tool, and constant voiceover often makes for bad filmmaking. Hearing a character’s internal monologue out loud feels tedious in a medium who’s strengths lie in showing, not telling. In a book this works just fine—–internal monologue is a novel’s bread and butter. Furthermore, a book can choose when and where to show Noise, and then let your imagination fill in the rest. In a film, however, Noise needs to be a constant presence, and the constant presence of internal monologue is just hard to pull off. I could see it getting really grating really fast. Even in movies that do voiceover monologues well (Fight Club, for example), it’s not nearly as omnipresent as it needs to be for something like Chaos Walking to function. Once again, is it possible to do this well? Yes. Will it be a ridiculous amount of work? Yes. Will Hollywood want to invest said effort into a young adult adaptation after the Divergent series’ final installment released direct to DVD and the young adult genre lies wounded and dying? We’ll just have to wait and see. I want this to be good SO BADLY; it’s the sort of adaptation I’ve literally had dreams about since I first read the books. But if the January release date is any indication, there’s a good chance that the film is just going to be thrown to the wayside.

Here’s the secret #1 reason why Doug Liman’s adaptation is doomed to fail, though: it’s live-action. Before you say anything, yes I know I’m an animation fanboy and yes, I know that “make it animated” isn’t the answer to all of life’s problems, but I really think it’s the answer to this one. We’re living in a world where Into the Spider-Verse was able to capture the feel of comic book sound effects through it’s visuals in a way that only animation could accomplish. This opens up so many options for representing Noise visually in a way that would break a live-action movie’s sense of realism. Having trouble keeping Noise in the background while characters talk in the foreground? Show it visually buzzing around characters like sound effects in a comic book. Maybe have it flare up when it needs to be seen and heard, and have it recede when it doesn’t. Maybe have different fonts and colors to represent each character’s unique Noise. Then in intense moments flood the background with the jagged text you can see in the pages of the book. Animation would make this entire project not only easier, but also more comprehensible and even more interesting and emotionally powerful. Live-action does have its moments, but here I really think that the strengths of animation can fully shine.