I cannot begin to describe how gorgeous, melancholic, restrained, yet extraordinarily moving Koe No Katachi is. Everything about the movie’s presentation—its visual style, editing, framing, soundtrack—carries a great amount of emotional weight. The story itself is a touching one as well, but it is the way the story is told that makes it captivating.

So Koe No Katachi follows Ishida Shoya, a student who bullied a deaf classmate, Nishimiya Shoko, in elementary school. Ultimately it is a redemption story as Ishida meets Nishimiya in high school and tries to right all the wrongs of his past. On a broad scale, this story with these characters really worked for me. Even in an effort to right his wrongs, Ishida is still not a perfect person. He can be a bit selfish, reserved, and hesitant when it comes to sticking up for Nishimiya. Now I’m not someone who will tell you that a good character needs to have flaws in order to be relatable, but I did find Ishida’s personality to be extremely compelling and sympathetic for these reasons. Also, I would like to add that Nishimiya’s sister is amazing. I just love the friendship she develops with Ishida and his family. On the less satisfying side of characters in the film, there’s Ishida’s newfound friend Nagatsuka. The movie never fully developed their friendship, and even at the end I still felt that Nagatsuka was taking advantage of Ishida without really being a great friend. Plus he was a little bit annoying. Then there are a few of the other friends who get even less development than Nagatsuka, like the orange-haired friend who doesn’t warrant me looking up his name due to how randomly he shows up. But the movie is already 2 hours long, and I’ll take more scenes between Ishida and Nishimiya over side characters in an instant. It’s just that there are some moments that seem sudden due to the amount of events and characters the film is trying to fit in its runtime.

However, I don’t really think that this broad scale look at the positives and negatives of the movie’s story and characters does it justice, because it’s in the smallest moments that Koe No Katachi shines. The movie likes to focus on minute details in a scene, like Ueno’s hand hitting the bars of the playground as she walks by, or nuts from a tree falling to the ground as seasons pass. The imagery is constantly glowing with a melancholic warmth, even in scenes of anger and sadness. But the movie rarely tries to overwhelm you with emotional stimuli, except for in the couple scenes where it wants to evoke a sharp emotional response. Instead it lets the small details, visual style, and soundscape seep into you to the point where you feel like tearing up without any specific event to trigger it.

This would probably be a good time to talk about the soundtrack, which utterly floored me throughout the movie. If you just listen to the tracks without any context, the OST might strike you as underwhelming, but it meshes with the visuals and editing so perfectly and helps create the film’s strong sense of atmosphere. However, the film’s soundtrack functions far beyond creating an emotional atmosphere. A large portion of the piano music was recorded inside the piano, and as a result you can constantly hear the physical sounds of keys and pedals being pressed throughout. This grounds the music in the real world and gives it a strong sense of physicality, which ties in perfectly the titular theme of the shape of the voice. Furthermore, when the movie does want to overwhelm you with emotion, the soundtrack complies, leading to what is (in my opinion) one of the most potent moments of music in any movie I have seen.

So overall, I freaking loved the movie. Given, it’s practically catering toward me what with it being (a) an anime, (b) a high school coming-of-age story, and (c) melancholic but heartwarming in atmosphere. Then it has (d) a unique and fantastic soundtrack, (e) a gorgeous visual style, and (f) fantastic individual moments. So yeah, no wonder I liked it so much. 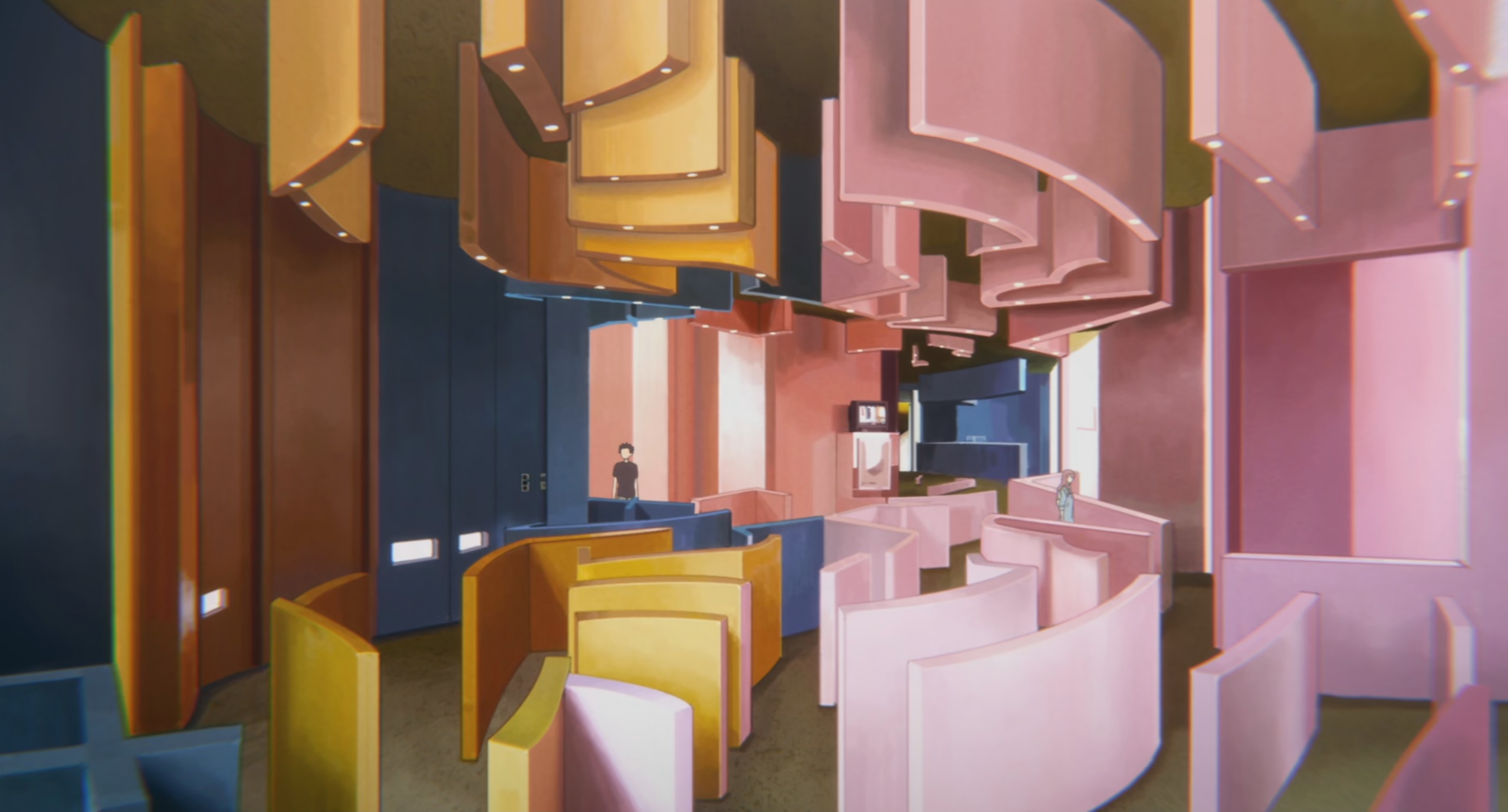 Yeah…so far this has been a bit more structured than I initially planned, so here’s my chance to just ramble on about the many things that I really loved (and some that I didn’t) in the film. The moment that really made everything hit home and connect for me was the elementary school fight between Ishida and Nishimiya. The golden light spilling in through the windows during the whole scene, the gorgeous piano score playing throughout, Nishimiya finally expressing her emotions and yelling “I’m doing my best” over and over—it all was so well-done. Ishida can’t understand Nishimiya, and they fight as their only way to communicate how they feel. The decision to have such a warm color palette and such a subdued melancholic score in contrast to the characters lashing out against one another made the scene all the more beautiful. Then there’s the ending scene, which, if you hadn’t already caught on, is now one of my favorite moments of music in movies of all time. The sheer power of the theme as we witness Ishida’s mental break-down forces you into this state where you can’t help but smiling and tearing up at the same time. This, coupled with the rhythmic editing bringing us back to the film’s opening moments drives home the scene’s emotion. If there’s one thing I would have liked to see in the film, however, it would be some sort of physical manifestation of Ishida and Nishimiya’s emotions toward one another. They had the nighttime bridge scene where they both sprinted to find one another, so just freaking hug when you see each other! You both deserve it, so please…. Nagatsuka displays more physical affection than anyone in the film, and I get that you two are shy, but come on. Anyway, this post is getting a bit long so I think I’ll end it here, just know that I could go on much longer talking about all the great details in the movie.